Welcome all! This is Madras College Magazine, the new online newspaper based on the originals dating back to 1889. It will include interviews, articles, short stories, comic strips, and more! If you’d like to feature on this newspaper, submit it to the PR & Media Committee by DMing us on the school Instagram page @madrascollege or by emailing gw10turnbullmolly@glow.sch.uk.
This issue contains:
Head Persons Interview, Men's Mental Health Article, Short Story.
Plus Find of the Month, Puzzles, Monthly Overview, and much more!
GET TO KNOW YOUR NEW HEAD PERSONS! 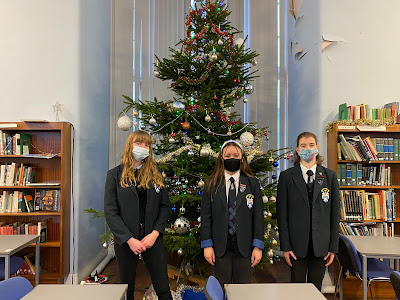 Image (L-R): Maisie Russell (HP), Mary Kennedy (HP),
Ailsa O'Riordan (VHP), absent: Tim Edwards (VHP)
INTERVIEWER: What do you plan to accomplish this year?
MARY: We are currently working on making a school improvement plan - something that pupils are able to read and understand, as well as parents, so they can look at and gain something from it - because currently it’s a big, wordy document that nobody really looks at. One of our key focuses is preparing the school for the move this year as we unite the two buildings. Short-term, we’re hoping to get some Christmas decorations up around school. Hopefully, some sort of celebration that is COVID-friendly. I’m sure things will pick up as the year goes on, but that’s the current stuff we’re doing!
I: What inspired you to apply for this role?
MAISIE: I’ve never done anything like this before, so I thought I'll give it a go. Equally I enjoy having the opportunity to work with and get to know lots of different people.
AILSA: I wanted to do the best I could for our school, and I thought that by being a Head Person I could do that to a high standard, so I applied.
I: How did you feel about the reaction to your appointment as Head/Vice Head Person?*
MARY: It was an interesting one! Everyone reacts differently to change, and for many the altered approach to Head Person appointments was not anticipated. So, understandably, the reaction reflected that. It took people by surprise and although some may not have communicated their opinions in the best way, I feel it’s important that everyone feels they can voice their views and are being listened to. This ensures diversity and freedom of speech within the school which is really important. With change, you’ll inevitably face controversy but I don’t think that’s as a bad thing.
Although it wasn’t a hugely positive start to the role, I was able to step up and communicate the concerns of the year with staff members which is a large part of what we do as Head Persons. I think now people are more open and accepting of the change. I’m definitely excited to work with the team this year.
TIM: Um, I don’t think the reaction to my appointment was the same as the other people’s, which was nonsense. It shouldn’t have happened that way, but, you know *laughs*. The reaction to my appointment was fairly neutral. I don’t think I was particularly involved in the controversy as much, as I may have sat on the side of my fellow Head People in that sense, but yeah. It was quite something.
MAISIE: There were some happy people and some unhappy people, but it's about acknowledging everyone's opinions and moving forwards, really.

I: Do you have anything you’d like to say to the haters?

MAISIE: Thanks for the support.

I: COVID makes things difficult this year. How do you plan to work around this to achieve things across the whole school, including both buildings?
TIM: Hopefully liaising with the S3 prefects in any way we can: they really are the sort of heads of the lower school, the same way that we have our prefects here. If we can take some of the [S3 prefects] to help us with creating our school improvement plan and our Visions, Values, and Aims, then that will be really beneficial and will hopefully impact the whole school.
I: What are you most looking forward to doing within this role?
MAISIE: Meeting and talking to new people within school and building relationships with the wider community.
I: Tell us the secrets of the New Madras!
MARY: I have been to the new building. The lunch hall is very High-School-Musical-esque, so I’m really hoping somebody breaks out into song one day. There might be pupil access to wifi, but that’s the biggest secret. If it doesn’t happen I’m really sorry. It’s rumours.
AILSA: It’s got quite cool windows.
I: How do you think this role will help you in the future?
AILSA: Communication, I suppose. I’ll be better at communicating, leading, getting stuff done, working out what to do, and being proactive.
TIM: I think it’s excellent for preparing you for potential leadership roles. You’ve got to liaise with people, with teachers and staff, and filter down their ideas and bring them into action; which is going to be important in any job, in university or learning. It’s all transferable skills, all stuff you can use for the rest of your life. I don’t think there’s ever a wasted minute.

*There was outcry amongst some of the S6s at the appointment of two Head Girls, despite the title being changed to remove the gender binary and bias. 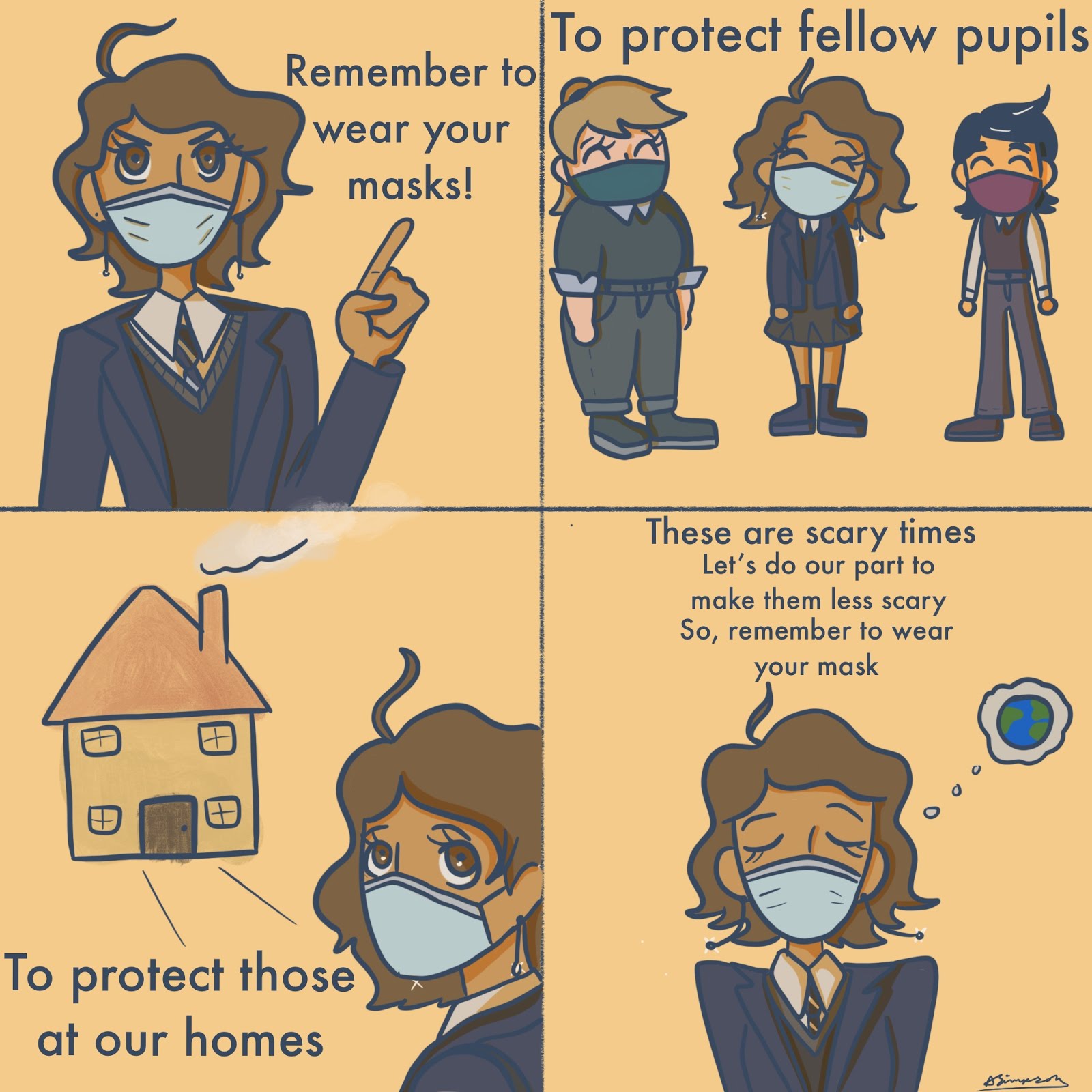 A short comic by one of our creators, Ashleigh Simpson, S6. Comic strips and other artwork submissions welcome!

It's important to take proper breaks from schoolwork, especially during lockdown. Here's a link to an online word search we made of new activities you could try! Enjoy :)

Find of the Month by Mione Nash, S6

On Friday 13th November 2020, recent work was carried out in the Athenian sewage system. As many people may know, Athens was the heart of Ancient Greece, producing many well-known historical people and places. The city is generally considered to be the birthplace of Western civilisation.

The work in the sewage system unearthed an amazing archaeological discovery - the head from a statue of the Greek god, Hermes; the god of trade, wealth, luck, fertility, thieves, and travel. The bust dates back to 300BC and was once used as a street marker known as 'herm'. This find is amazing for helping to understand more about the Classical World. 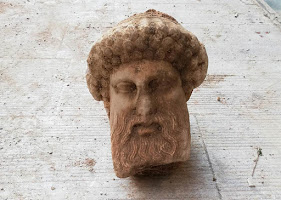 The Equalities Committee is looking for people who are members of marginalised communities interested in participating in discussions concerning discrimination, representation, and other issues. If you'd like to be a part of this, contact them on Instagram @equalitiescommittee.
The Heritage Committee is looking for people to feature on their new Madras Heritage Podcast. They are also open to suggestions for topics to be discussed on it. If you are interested contact them on Instagram @madrasheritage or speak to Luca Venditozzi (S6).
General Study Groups will be running Thursdays after school in the Huts from 3:30pm-4:45pm. Peer tutors will be available to help all S4s and S5s with their studies. If you have any questions email gw10masonruth@glow.sch.uk. Rooms of subjects:
H1 - Business, Accounting, Admin
H2 - History (N5), Classical Studies, Modern Studies, PE
H3 - English, Music, Drama, Maths
H5 - Biology, Physics, Spanish, Chemistry, French
The Madras Pride club meets every Monday lunchtime at South Street in Hut 2 for discussions, tea, and biscuits. Everyone is welcome. Their aims are to support one another and raise funds and awareness for LGBTQ+ equality. Keep up to date on their Instagram page @madras_pride.